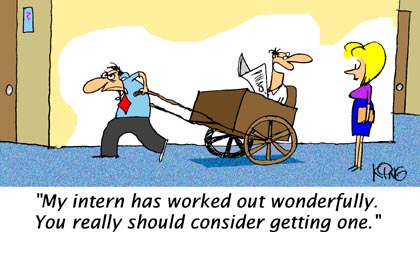 The graduate job market is tough right now. Make no bones about it. With an increase of good-quality graduates and a distinct lack of jobs, it often boils down to experience which separates candidates. And here is where the problem arises.

Increasingly, this is the story for the alumni of the 2010s, where gaining this vital experience comes at a crippling financial cost. Not only are many graduate interns expected to work for free, but also pay for their own transport, accommodation (if needed), and food. Bearing in mind that these interns rarely have a premium of funds after university, you can see a self-deprecating cycle emerging, in which they are stuck in a limbo of unemployment with fewer prospects than their qualifications deserve.

Yes, it is a tough economic climate out there, for large corporations as well as small businesses, but there needs to be some form of black-and-white legislation put in place to ensure that graduates aren’t being humiliatingly exploited –  particularly in cases in which a company keeps an intern on for longer than a month. 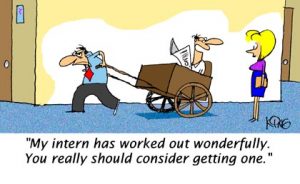 At the moment, the government’s legislation is frustratingly vague – an intern’s legal rights depend upon, as www.gov.uk states, ‘whether they are classed as a) a worker, b) a volunteer, or c) an employee’, and they only receive employment rights if they do ‘regular paid work for the employer’. It all becomes dependent upon the very subjective value of whether the work you do is classified as bona fide ‘work’ for the company you work for, and subjectivity provides the very useful ‘grey area’ for corporations to sometimes exploit their interns.

The CIPD (Chartered Institute of Personnel and Development) explain the legislative tangle which interns find themselves in. They state that ‘the issue of whether an intern classes as a ‘worker’ is made more complicated by the fact that, in some circumstances, they could instead be classed as ‘volunteers’ (who are under no obligation to perform work, have no contract or formal arrangement and have no expectation of and do not receive any reward for the work they do besides having their expenses reimbursed), in which case the National Minimum Wage (NMW) legislation does not apply.’

The Cost of Work Experience

I myself have been relatively lucky with my own work experience – everything I have done I have found enlightening, useful and enjoyable (I know from others’ experiences this is not always the case), but it hasn’t been without severe financial cost. I’ve picked up useful contacts, it’s dotted the ‘t’s on my CV, and has no doubt given me that ‘real-life experience’ which is probably more useful than the work itself, but in each of my three ‘proper’ two-week placements, I have had to fund my own expenses. Even with one of the three offering £50/week for transport, those six weeks in total cost me over £500 in transport fares and food.

I can see it from the employers’ points of view: what if the intern/workie doesn’t demonstrate any worth to the company in their time there? What if something they do, because they aren’t trained appropriately, negatively affects the company? In my own experience though, I know, and the employers do too, that things I’ve done have made a demonstrative effect upon the company. I’ve had pieces published. Where is my fair wage? Personally, I find it insulting.

By all means, the government and CIPD offer ‘guidelines’  for employers, ‘advising’ them to pay NMW or above for interns, should they prove their worth to the company. They may as well be whispering in a hurricane, though – ‘guidelines’ and ‘advice’ are not really at the top of an employer’s checklist; cold, hard legislature generally is.

I was fortunate enough to find an agency which ensured that, for my three-month internship period I would receive some semblance to a decent wage, but I know that many have not been as fortunate. Many are put off the idea of internships altogether, and so abandon the thought of their dream job in favour of something which can offer them a more reliable income. Not only is this a great shame, but it is an incredibly myopic stance for employers to take. Due to their inability to pay a worker £1000(ish)/month (NMW), they may have lost the opportunity to find a real gem in their midst, who may repay that value hundreds of times over in the coming years.

So this is a threefold appeal. To employers: please don’t let the incredible variety of talent slip through your fingers because you’re too short-sighted to see the potential in a new generation of workers. To the government: tighten up legislation so that interns have some form of employee rights and aren’t subject to the varying whims of those employers who abuse their superior position. And finally, to interns (yes, this boils down to you too): do your homework. Think about the internship: is it relevant to what you want to do? Will it give you transferrable skills and insight into that industry? Does it have the possibility of a permanent position at the end of it? If it is unpaid, will it give you any demonstrative value at the end of your tenure?

The only way to break out of the self-deprecating cycle is for something to change – be it employers’ attitudes towards interns, regulations, or graduates’ own mind-sets before they take on an internship. As it is, Britain’s graduate unemployment figures are at startling levels (a Guardian story in September detailed that nearly half of this year’s graduates were still searching for a job three months after finishing university), and if things continue as they are, they will only get worse. So buck your ideas up, Britain. The fate of a generation may depend upon it.

James Day found his current internship with Instant Impact – a graduate recruitment agency who insist all the employers they work with pay their recruits.