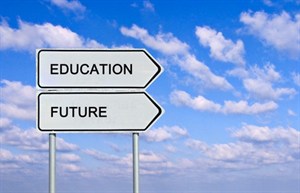 The types of degrees that sixth formers or college students apply for are constantly changing. The popularity of courses varies year upon year, so how do you give yourself the best possible chance of getting that elusive place and, just as importantly, a great job afterwards?

UCAS, the official service for UK university applications, release annual figures detailing the number of applicants and applications, broken down by subject area and specific course. These numbers reveal some interesting statistics and are very much worth a look for prospective students, particularly those who are uncertain about what to study.

For most, A levels are a relatively simple choice. Although colleges can offer a broader range of subjects than the average school sixth form, the options are still reasonably limited, which is a far cry from the wide range of university courses available. From circus performing and beer brewing to puppetry and Viking studies, higher education suddenly opens up an absolute plethora of weird and wonderful options.

This table, constructed using the aforementioned UCAS figures, shows the percentage of successful applicants per subject group and reveals some interesting results. (Note: anything over 100% indicates a subject that ended up taking on more students than initially applied – through clearing, for example.) 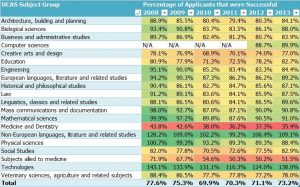 The data clearly illustrates that landing a place on a Medicine, Dentistry or similar course is the most challenging, but possibly an even more striking finding is the fact that they are becoming more competitive year on year. Back in 2008, almost three quarters of applicants to subjects allied to medicine were successful, which has now drastically dropped to around a half. Medicine and Dentistry themselves have also become gradually more competitive, with the percentage of successful applicants falling from 43.8% to 35.4%.

These sorts of changes could be related to the number of jobs available in the relevant industries; for example, with the government now requiring all new nurses to be degree-educated and the currently poor level of NHS staffing, it’s no surprise that the medical sector has seen such an increase in competition for university places. Nursing applications have more than doubled in the last five years to a record high, with just a measly 11% success rate.

So, should you take this kind of thing into consideration? The answer is that it depends. If you’ve wanted to be a dentist since you were a child and have geared all your qualifications, work experience and extra-curricular activities towards it for your entire life, the chances are you aren’t going to suddenly baulk at these figures and change your mind. However, for those that are unsure about what degree they want to pursue, taking a closer look at the in-depth UCAS figures and doing some extra research might not be a bad idea.

Citing the medical subject area as an example again, the difference in competitiveness varies drastically between courses; only around one in eleven Pre-Clinical Medicine applicants are successful, whereas about one in eight applicants are accepted onto subjects allied with Medicine. The likelihood of success is greater still for related courses like Pharmacy, Nutrition, and Ophthalmics, meaning that specifying in this area could be a wise move in such a competitive environment.

For many years, vocational courses were looked down upon, or even labelled as “Mickey Mouse degrees”, but this unfair perception seems to be rapidly fading. Employers and students are both realising that degrees involving work placement and industry-specific skills are becoming more and more useful in such a cut-throat, competitive graduate job market; they are no longer seen as second best.

Writing for The Huffington Post, Anne Whitehouse, Head of Marketing at Buckinghamshire New University, emphasises these advantages. She says, “Employers often express concern about the quality of graduates and the perceived disconnect between higher education and the world of work. In a competitive employment market, employers want staff with an understanding of the business they’re joining, and skills that are relevant to the workplace.

“Many graduates who study ‘traditional’ subjects go on to successful careers in specialist industries, but if you’ve done a course that is tailored to the business you want to work in, you’re more likely to be pushing on open doors and to progress quickly.”

It’s important to note that this is not a black and white issue, though and that people have many different reasons for their choice of course. Having your mind set on a specific degree, be it traditional or vocational (or even online, like Fresno Pacific University Online), being really passionate about is certainly not a bad thing; indeed, picking a subject you enjoy is extremely important. When making a decision, though, no matter what your circumstances, it’s vital that you do your research in as much detail as possible. Find out what the course consists of, what the alternatives are and what the options are after university. It might reinforce your decision or lead you down an entirely different, but potentially just as rewarding, path.