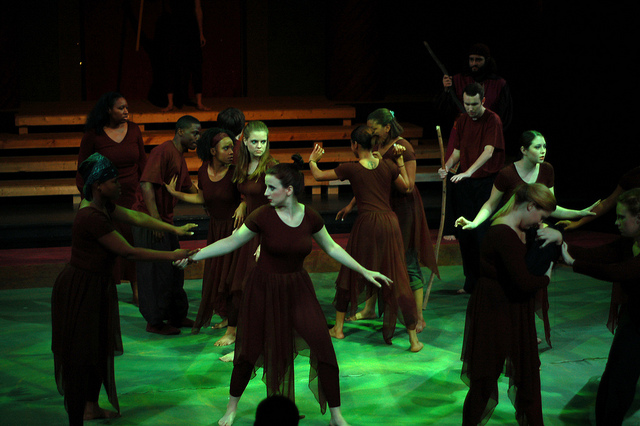 Drama students are seen as creative types who swan around quoting Shakespeare and read sonnets.  But is this all there is to it?

It’s not just coffee and soliloquies

People have so many preconceptions when they hear the word ‘student’.  Worse still, when I tell people I study Drama, I can see their eyes glaze over as they imagine me quoting Shakespeare and lazing around in treetops.  Well I’m sorry to disappoint, guys, but there’s more to it than that.  My fellow Drama students are some of the hardest working people I have ever met.  A few examples for you…

The early bird catches the worm

Well, the early actor hasn’t been rehearsing. I will admit, we do rise pretty late, but that’s far from being lazy; we just happen to have been up until 3am learning lines and researching the political and economic context of August Strindberg (or something else equally brain-aching and obscure), as well as making sure our characters are well-rounded and justified in all of their actions. This is on the nights we’re not watching, reading or performing in a play in some hazy ‘fringe venue’ that is really just a dark cellar underneath a pub.

When we do rise, like all other students, we have our lectures, seminars and workshops – though our problems do vary slightly from all other disciplines. Some of my housemates study History, and are constantly frustrated at being the only ones who contribute to seminar discussions. On the contrary, the biggest issue for us Drama students is actually getting a word in.  Want to make a point?  You’re going to have to be prepared to talk over, interrupt and shout down the other twenty people in the room to make yourself heard.

[ALSO READ: A Day In The Life Of A French And German Student]

And it doesn’t end when uni does

Class is over for the day, brilliant – off for a latte and a poetry reading in a little artsy cafe. If only!  Just because class is finished, that doesn’t mean we are. Most days continue in a rehearsal room working on some performance for the next class, or perhaps running lines for the play you’ve decided to put on because, well, you want to. Most of my course-mates are regularly rehearsing for more than one show at a time, splitting their evenings between the various companies they work with. All for free.

After all of this, which takes up most of the day, we might catch a show. Maybe one that a friend is in, or a company we’ve worked for are putting on. But more likely we’ll be off to a minimum-wage job that is fairly irrelevant to our life plan. Why? How else do you think we fund our visits to the theatre and trips to London?

What’s that? We’ve gone to class, had a rehearsal, done a shift at work and managed to get home before midnight. I guess that means it’s time to do some self-publicity – upload some art to a blog (almost every student on my course has either Tumblr or WordPress), plug our latest show, write a review of the play we just caught, maybe bash out an article. Freelance workers, even aspiring freelancers, can never stop self-promoting if they hope to ‘make it’.

So perhaps the next time you meet a student who studies a creative subject you’ll smile to yourself. Not because they’ve taken the easy option, but because you know at least once you’ve finished work you can head home and do nothing at all. The more competitive the job market, the harder the individual must work to succeed in it. There are few careers harder to crack into than creative ones. Perhaps you could offer some encouragement, express an interest and check out their blog/Twitter feed/online presence. Trust me; nothing will make them happier than that one more hit or follow.

Can you relate to this? Is your degree subject laced with contempt and met with derision? Share your stories below.

About Author: Natasha McGregor is a Drama and Creative Writing student in Bristol who writes for the GKBC Academy.  She doesn’t act and is constantly battling against the stigma dumped on creative students.